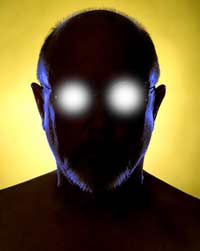 HAPPY ENDING was born out of the sick mind of Phil Condit, the filmmaker behind EMPRESS VAMPIRE (aka ALETA VAMPIRE MISTRESS), and the force behind SICK PUPPY PICTURES.

He says, “I was trying to come up with a premise for a creature feature that would use limited locations to help keep the costs of the production low. The location needed to be one populated with scantily clad women (a staple of low budget horror films) and remote enough to cut the characters off from rescue.

Strip Clubs have been used many times for the scantily clad women, but they generally aren’t in remote locals.

Cathouses, however, are a different matter. They are often placed on the border of counties and states where they are legal, which is not necessarily close to civilization. Living in Los Angeles, California, the neighboring State of Nevada came to mind.

Next I needed a creature. I wanted something that could hide from the potential victims and still prey on them. Its origins needed to be semi-plausible (as plausible as movie monster origins ever get, that is). The notion of Nevada brought to mind Area 52, where alien remains are rumored to be under lock and key. So let’s make the monster an alien.

OK. So we have a setting and a creature. Next we need a cast of memorable characters to battle the alien for their lives – and let’s throw in “the fate of humanity” for good measure - to up the ante.

There is always a Madam in a bordello. I had worked with the ravishing and enchanting Ange Maya who coproduced and played the titular role (so to speak) in my last feature, EMPRESS VAMPIRE, and wanted to work with her again. Sounds like a good idea for a house of ill repute to me, so MADAM WANG’S HOUSE OF HAPPY ENDING was born.”